(A somewhat shorter version of this article appeared today in “+972”. A Hebrew version appeared in “Local Call” and “Haifa Ha-Hofshit”)

Raja Eghbarieh, former secretary-general of the Abnaa al-Balad movement, was arrested from his home in Umm Al-Fahm on September 11, the second day of the Jewish New Year holiday. On Thursday, September 20, he was indicted in the Haifa magistrates court of “incitement to terror” and “identification with a terrorist organization”, based on 10 different posts on his personal Facebook page. Together with the indictment the prosecution filed a request for an unlimited remand of his detention – “until the end of the legal proceedings”. On Tuesday, October 2, the first day after Sukkot, the remand request was heard.

In the political “dead” season, when most activists are preoccupied with the local elections, Eghbarieh’s detention and trial was a reminder for the Arab society of the continuing attack on free speech and space for political activity and a series of solidarity actions were organized. On Saturday, September 29, a wide range of political activists from all the Arab parties and movements participated in protest vigils that were called by “The High Follow-Up Committee for Arab citizens of Israel” in Umm al-Fahm, Nazareth and Sakhnin. On Monday, October 1, the Arab Palestinian population commemorated the martyrs of the October 2000 intifada by a general strike and a central demonstration in the town of Jatt in the triangle. But just as that demonstration finished, some of the activists rushed to another protest rally in the center of Shfa’amer for the release of Eghbarieh and against political persecution. More solidarity actions were held in the West Bank, Gaza and several European cities. (Call for international solidarity is here.)

On Tuesday, October 2, Judge Maria Pikus Bogdanov heard the request to extend the detention of Eghbarieh until the end of legal proceedings. The outcome of this hearing can be decisive for the entire case, as legal proceedings can take years. When the defendant is in detention during the trial, he is under pressure to agree to a “plea bargain” rather than to conduct a protracted legal battle over his innocence, which might result in detention for longer time than the sentence itself. (Actually the natural response of the court is to sentence the accused at least for the period that he has already spent in prison.) House arrest can also paralyze the life of the defendant and take a high price from those who are certified to be his custodians, who must be confined to him for a long time, and, if the defendant is convicted, the time spent under house arrest is not considered part of the punishment.

Vigil in front of the Haifa court before the remand hearing – October 2, 2018

The Follow-Up Committee called for a protest vigil in front of the Haifa court before the remand hearing – and about 100 Palestinian activists responded to the call, including prominent leaders from Balad (three Knesset members) and the Islamic Movement. At the appointed time the slogans were folded and the activists entered the court building – but it turned out that the hearing took place in a rather small room and most of the supporters remained waiting for hours in the corridor. The court’s guards, aided by the dark uniformed policemen of the “anti-riot” unit, were not satisfied with just “maintaining order,” but forbade other supporters to enter the courtroom instead of those who left, and at one point even cleared the corridor of the audience and prevented anyone from approaching the area.

In the courtroom itself, a reinforced team of lawyers stood up to try to prevent the detention from being extended indefinitely. The team was led by Attorney Hassan Jabareen, founder and head of the Adalah Center, accompanied by Attorney Rabea Eghbariah of Adalah, Attorney Omar Khamaisi of Al Mezan Center for Human Rights, and lawyers Hussein Abu Hussein, Afnan Khalifa and Ahmad Khalefa. Due to the importance of the discussion, they decided to “go the full length,” while taking the risk of exposing the line of defense even before the beginning of the trial, and discussed in detail each of the ten publications that are mentioned in the indictment. They objected to the translation that was supplied by the prosecution and stressed the explanations given by Eghbarieh in his interrogation. Their main claim was that all the publications do not call for violence, but constitute a legitimate expression of political analysis and opinions, and therefore the indictment itself is baseless.

In some cases, the defense attorneys pointed out specific words that were added, under the guise of translation, into the Hebrew version, but did not exist in the Arab source – in order to add “aggressive” tone. In other cases they presented an alternative translation of the same texts – which gives them different meaning. The defense attorneys also noted that the prosecution is bringing the texts in the indictment in Hebrew without specifying who translated them. They complained that the evidence doesn’t include the testimony of an expert on the translation. The prosecutor and the judge do not know Arabic, and finally the judge requested the prosecutor to bring written comments to the claims regarding the misleading translation.

In the context of the explanations of the legitimacy of the publications, it is worth noting the discussion about one publication, commemorating the tenth anniversary of the death of George Habash, the founder of the Popular Front for the Liberation of Palestine and one of the most prominent and influential figures in the history of the Arab left in general. Attorney Jabareen mentioned that the publication focuses on Habash’s activity to establish a research center, rather than any violent activity, and wondered how such a publication could be interpreted as identification with a terrorist organization. He noted that Eghbarieh himself, along with other leaders of the Palestinian citizens of Israel, has appealed in the past to the Israeli “High Court of Justice”, demanding the right to hold a memorial conference for Habash in Nazareth. The request was denied on the grounds of “fear of violence,” but it was not claimed that holding of a memorial service for Habash is by itself illegal.

The first posts that are mentioned in the indictment relate to the attack from July 2017 by three armed Palestinians from Umm Al-Fahm who killed two Israeli policemen near the Al-Aqsa mosques in occupied East Jerusalem, before being killed themselves. The indictment brings long translations of the posts in Hebrew but doesn’t specify what specifically is, in their view, “illegal” in each post. While the posts don’t express support for the armed attack, it seems that the very use of the word martyrs (“shuhada” in Arabic), the analysis of their motives and their expression of grief at their death is regarded as unlawful.

Another post in the indictment is a picture from the commemoration at the first anniversary to the killing of Bassel Al-A’araj, who was shot by Israeli soldiers in Ramallah. Al-A’araj was well known as an independent activist and an ideologue of the youth protest movements in the West Bank. The indictment claims he was a member of the PFLP and performed terrorist attacks at the order of Hezbollah.

Another issue that was emphasized by the defense was the fact that the investigation against Eghbarieh was conducted for many months (apparently from February 2018) and that this meant that his publications were available on the Internet and accessible to all for months (some even more than a year), and that the police were aware of them long before they arrested the defendant. Moreover, the police issued an arrest warrant against Eghbarieh on August 7, 2018, but arrested him only more than a month later, on September 11. The police did nothing to warn Eghbarieh or remove the publications, neither following their appearance nor even after his arrest. The prosecution now claims that his release, even under restrictive conditions, constitutes a “danger to the public” because he might publish other publications.

At the end of its arguments, the defense brought a long list of cases in which Jewish defendants were accused of incitement to violence against Arabs and even of incitement to harm IDF soldiers against the background of the evacuation of settlements that the state recognized as illegal. In those cases there were direct and explicit calls for violent action, which did not exist in the publications attributed to Eghbarieh. In some cases the prosecution even showed a direct connection between the incitement and violent acts that followed. Nevertheless, in all the cases brought by the defense, the state did not request detention until the end of legal proceedings. 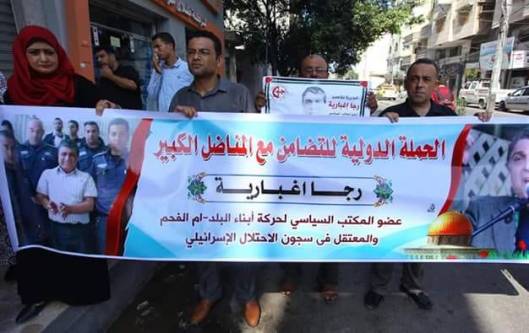 At the end of the hearing, the judge seemed to take the defense arguments seriously, and asked the prosecutor harsh questions. The prosecutor did not know Arabic and couldn’t relate to questions about the translation. He also did not know how to explain why the police waited so long between the time they became aware of the publications and until they decided to act against them. With regard to the claim of discrimination in enforcement and the avoidance of the arrest of Jews who are accused of incitement, he tried to argue that this is a completely different clause in the law and that there is no place for comparison – but the judge didn’t seem to be convinced by his argument. Finally the judge sent him to consult and reply in writing by Thursday. Another hearing on the remand request was scheduled for Sunday, October 7, at 14:00.

Before the meeting ended, Attorney Jabareen managed to complain that since the arrest of Eghbarieh three weeks ago, the Israel Prison Service has prevented his family from entering clothes for him to change. The judge wrote down a decision instructing the Israel Prison Service to allow it. There is a stinking smell in the Israeli “justice” system, and apparently it is not just the prisoners’ clothes.

3 thoughts on “Raja Eghbarieh’s trial: Solidarity and legal struggle to avoid detention until the end of proceedings”