Below is a report about the Sunday, March 19th, hearing in the trial of Palestinian poet Dareen Tatour. An edited version of this report was published in the +972 site. This article was also translated to Spanish by Rebellion.

Arresting a poet for publishing a poem is extraordinary enough. Putting her on trial while a translation of the poem by a policeman is fully cited at the center of the indictment made thing surreal. Last week the defence case laid the lyric response by bringing a literature expert and a translator to testify in court. Update about the unprecedented trial of Poet Dareen Tatour.

It is almost a year and a half since Poet Dareen Tatour was arrested from her home in Reineh (near Nazareth) on the 11th of October 2015. She spent 3 months in different prisons and half a year in house detention in exile in Kiryat Ono. Now she is still under strict house detention in her home as the trial against her on charges of incitement is grinding to its end in the Nazareth Magistrate’s court. 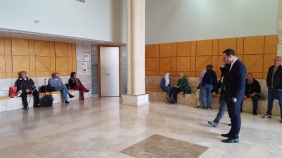 Waiting for the hearing to begin

The prosecution finished to rest its case in September 2016. Most of it was designed to prove that Tatour’s Facebook account belonged to her and that she really published the poem and the two Facebook statuses that are the subject of the indictment.

On November Tatour testified in the court and admitted that she published those publications in their Arabic original. She explained that she expressed a legitimate protest against the occupation denouncing the crimes that are committed against the Palestinians by the army and the settlers. She said that the police translation distorted her texts. Over three long days of counter interrogation, in November and January, she was grilled by prosecution attorney Alina Hardak that tried to make her “confess” her “support of terrorism”, but she solidly defended her principles.

Should poets be arrested?

The first witness was Prof. Nissim Calderon, an expert on Hebrew literature. In his written expert opinion he stated that there are special rules concerning the free expression of poets. He described a long tradition of poets that used harsh words in response to oppression or injustice, sometimes clearly calling for violent actions. He concluded that such calls in the context of poetry were not legally persecuted even by very oppressive regimes like the Tsarist regime in Russia or the British Mandate in Palestine. 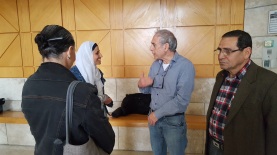 Prof. Calderon chose three of the most prominent Hebrew poets and brought specific examples of their subversive texts. He cited Bialik writing that “With furious cruelty / We will drink your blood mercilessly”. In other lyrics, also cited, Tchernichovsky says “Give me my sword, I won’t return it to its scabbard / What did my lips elicit? I want battles”. Despite these clear calls for violence by leading Jewish poets, the anti-Semitic Tsar’s secret police didn’t arrest or prosecute them.

The third example cited in length by Prof. Calderon was the case of right-wing Zionist poet Uri-Tsvi Greenberg. He openly incited for violence and was actually a member and ideologue of the explicitly named “Brit Ha-Biryonim” (The Thugs Alliance) that organized violent resistance to the British occupation but was not punished for his poems.

In cross examination the prosecutor tried to imply that Greenberg was not arrested for his poetry because the British Mandate didn’t prosecute inciters. No, said Calderon, my uncle was exiled from Palestine because he supported illegal Jewish immigration. When the prosecutor suggested that the immunity of poetry should be limited at tense times, he mentioned that the British didn’t prosecute Greenberg even as he called for resistance to their rule at the time that they were fighting the Nazis in the Second World War.

What did the poet mean?

Both the prosecutor and the judge already understood that they have a problem with the police translation of Tatour’s poem. The policeman that translated it had no specific expertise in translation. When he testified in court he was asked why he was chosen to translate the poem and answered that he learned literature in high-school and loves the Arabic language. 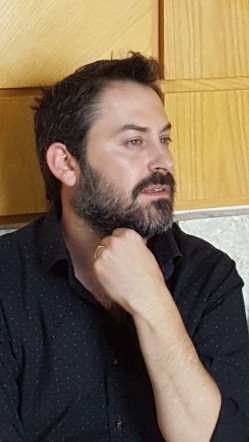 When Tatour testified, the prosecutor wanted her to give her own translation to Hebrew, but she refused, saying that she doesn’t know Hebrew well enough to translate poetry. The prosecutor wanted her to read the poem in Arabic so that the court’s translator will translate it and the words will be written in the protocol as her own words. She refused.

Maybe they felt some relief as the defence brought its own translation of the poem, made by Dr. Yoni Mendel, an experienced literary translator and a researcher of the Arabic language in its social context and its role in Arab-Jewish relations in Palestine. His translation was significantly different from the one in the indictment. He testified as an expert that the police’s translation is deliberately and systematically distorting the text to make it appear extremist and violent.

The most blatant contradiction between the two translations was in the following lines: “Do not fear the tongues of the Merkava tank \ The truth in your heart is stronger \ As long as you rebel in a land \ That has lived through raids but wasn’t exhausted.” The last two verses were translated by the policeman to “As long as you resist in a land \ Long live the Gazawat and will not tire”. Typically the policemen left the word “Gazawat” in Arabic, probably because he didn’t find the proper word. In his testimony he explained that the word was used by Arab tribes at the time of the Jaheliya (before Islam) to describe attacks on other tribes for robbery or enslaving women. Where the text clearly speaks about the raids that the Palestinians are subjected to as victims, the police translation transformed the victim into the aggressor.

Who are the martyrs?

On a more profound level, much of the emphasis about the translation, and much of the counter interrogation, surrounded around the sentence “Follow the convoy of martyrs”. The Arabic word for “martyrs”, Shuhadaa, was not translated to Hebrew by the police translator but grammatically adjusted to Hebrew to become “Shahidim”. In his expert opinion and enlightening explanation in the court Dr Mendel showed how basic Arabic terms are kept in Arabic in a way that neutralizes their original meaning and the basic human empathy that this meaning implies. Instead Arabic words like Shahid or Intifada acquire new threatening meanings in Hebrew far from their original context.

Lawyer Gaby Lasky – All the objections were refused

He explained that for the Palestinian Arab public the word martyrs refers to all the victims of the occupation, the majority of them didn’t even try to resist. It is an Israeli invention to interpret the word “Shahid” as referring to those Palestinians that died while attacking Israelis. In the specific context of Tatour’s poem, Mendel supported his interpretation by the fact that the poem relates to three specific martyrs: 16-years old Muhammad Abu-Khdeir from Jerusalem who was kidnapped and burned alive, Baby Ali Dawabsheh who was burned with his parents in his home at Duma and Hadeel Al-Hashlamoun who was shot at an army checkpoint in Al-Khalil.

The prosecutor tried to prove that the interpretation of “Shuhadaa” as victims was wrong as, after all, the poet couldn’t advise her readers to be murdered like them. Dr. Mendel explained that the call to follow the martyrs didn’t mean a wish to die but a more general concept of following their heritage: Embrace bereaved families, don’t give up the struggle and refuse to accept solutions that deny Palestinian national and human rights.

The case of poet Dareen Tatour became a symbol for the hundreds of cases where Israel is persecuting Palestinians over political expression, mostly in social media. Many poets, writers, intellectuals and activists, both in the country and abroad, expressed their solidarity with her and called for her immediate release and for the charges against her to be dropped. Pen International and related writers organizations all over the world adopted the case.

The fact that leading intellectuals like Prof. Calderon and Dr. Mendel volunteered to give evidence and endure torturing counter-interrogation (Dr. Mendel was grilled for 5 hours) is the last example how this trial resonated in much of the liberal public opinion. Now defenders of the right of expression and free arts also collect money to help with the legal expenses, which till now fell solely on the poet’s family.

On Tuesday, March 28, the last defence witnesses should give evidence. As the sides will summarize in writing, it will be probably the last hearing before the verdict will be given, maybe two or three months from now. The maximum penalty might be up to 8 years in prison. An appeal from one or both sides is very likely in this high profile case. In the meantime poet Dareen Tatour is under house arrest and might easily stay so for full two years before the judicial decision about the meaning of her poem.

(If you know Hebrew you can read more about this hearing in Haifa HaHofshit, Local Call and HaOketz).