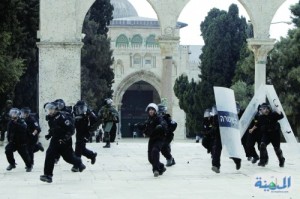 From the start of the so-called war against the so-called “Islamic State” I wanted to write about the similarities (and some differences) between the new scourge and that old menace of the “Jewish State.”

The similarity is so obvious that many other writers have already written long and wide about it: The attempt to establish a state based on religion by zealots that have little to do with the religion itself but find it as an easy pretext to force their rule… The exclusion of anybody that doesn’t abide by the “state’s religion” and the resort to massacres and ethnic cleansing… The total denial of Human and Civil Rights of the population under their control…

There are also important differences that should be noticed, both between the two movements and in the response of the world to their behavior.

The emergence of the “Islamic State” movement was an extreme response to a state of extreme oppression, both in Iraq and in Syria, where sectarian-based regimes systematically oppressed the population and bombed their own cities. Zionism was from the beginning a colonialist movement – not resisting anti-Semitism in Europe but using it to mobilize settlers to rob and oppress the native inhabitants of Palestine.

This comparison is mainly directed at the western public opinion, which is so shocked by the atrocities of the “Islamic State” but allows its political leadership and state apparatus to arm, finance, and provide legal impunity to the “Jewish State.”

Accelerating toward the wall

Typically, when we compare the bearded, eye-rolling head cutters to the shaved, tie wearing types that bomb cities by remote-control, much of the western public opinion may resist the comparison, even though from the point of view of the victims, the “civilized” appearance and after-shave smell of their torturers doesn’t count for much.

Recent events in Palestine, particularly in Jerusalem, open a new arena for comparisons. In a series of calculated steps, the Israeli establishment and extreme settlers and religious groups are undermining any hope of a political settlement and pushing for more confrontations.

The last “round” concentrated around the Israeli attempt to change the “status quo” in the Aqsa mosque and Al-Haram Al-Sharif on which it is built. Like many times before, Jewish religious holidays, when most Israelis have more free time, are used to concentrate efforts to get on Palestinian nerves and rights, invoking Palestinian anger, and hence unleashing a deadly response from the Jewish state’s army and police against the Palestinians.

For many of Israel’s western supporters, even for many ordinary Israelis, the deliberate provocation of conflict around Islam’s thirds holiest site looks like madness. But it is only the latest in a series of provocations, from the abolishment of the promised release of old prisoners that halted the imaginary “peace negotiations,” to the re-imprisonment of Palestinian prisoners that were released in the last prisoners’ exchange, and, of course, the almost daily announcement of new settlements on stolen Palestinian land. Israel also put obstacles on any attempt to reconstruct Gaza after its massacres campaign this summer, trying to provoke another deadly round.

This new wave of provocations is nothing new for Zionism. Already in the beginning of the 1980’s the “Jewish Underground” not only killed innocent Palestinians – which was common practice all along Zionist history – but actually planned to blow Al-Aqsa mosque to provoke an all-out religious conflict. Those “heroes” found wide sympathy in official Israeli circles and spent only symbolic periods in prison.

Actually, Israel’s racist regime was never fond of “Apartheid” – Separation – in the sense of separation between Jewish settlers and the Arab natives. When it builds walls, it is for separating Arabs from their lands, but they put Jewish settlements and army posts on both sides of the wall, in order to provoke more conflict and continue with ethnic cleansing. Gaza is the exception, because it is such a densely populated area, and the main reason for the Israelis to pull out was that they prefer to handle it with bombs, not bullets.

Within the framework of a zero-sum conflict, where survival is equal to the demise of your enemy, extremism is not necessarily hot-headed.

For many Sunni Arab, the appeal of the Islamic State stems from the despair from any democratic political settlement. The IS bullies are the guys that will fight it to the end. Frightening your enemy counts more than appearing logical or ready to compromise.

For the Jewish State zealots the competition for extremism is not only for internal populist reasons either. On one hand the Israelis like to appear mad in order to make everybody expect unproportional violent response in any conflict. But the current spree of provocations doesn’t sum up to deterrence… by initiating confrontation, the Israelis want to find the excuse to use more of their military superiority toward their basic goal of controlling all of Palestine, “free” of the Palestinians. Ethnic cleansing was and is what Zionism is all about.

The Zionist leadership is encouraged by the deep splits and internal conflicts in the Arab world to unleash unrestrained attack against the Palestinians. They get unlimited support from the counter revolutionary A-Sisi in Egypt and from other reactionary forces that are even more hostile to the Arab masses after they felt a danger to their privileges from the Arab Spring. But by their attacks on Muslim holy places, they might go one provocation too far – arousing against them the anger of the masses all over the region.

ODS is for everybody

For a long time we are struggling for One Democratic State in Palestine – ODS. It is the most obvious alternative to Zionism – bringing back the Palestinian refugees and building a state to serve all the people of the country, not only the believers of one religion.

Now that the conflict in the Arab world has developed into civil wars, where the sectarian divide is manipulated by local dictators, the perspective of ODS, a civil state for all its inhabitants, looks like the only reasonable solution for many other countries in the region as well.

But recent developments also made some of our activists despair of the perspective of ODS in Palestine. Israel is becoming more belligerent, and there are no sign of democratization. Well, this is a reason of despair only if you expected ODS to be the result of democratization of Israel. I never thought this was on the cards. ODS will be achieved as a result of a victory of the Palestinian national liberation movement over Zionism. The fact that Zionism is getting ever more awful only implies that we should be better organized to bring this madness to its end and repair the damage to make the country inhabitable again.