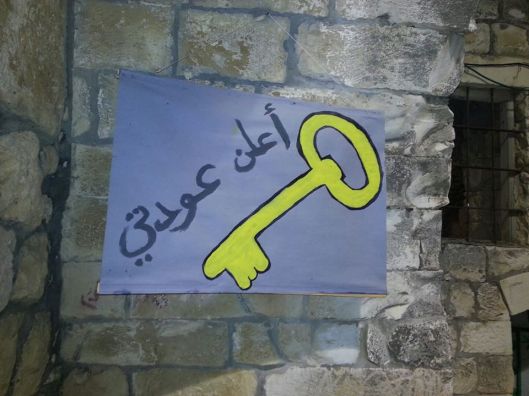 It is more than a year since a group of youth from the destroyed village of Iqrit decided to personally implement their right of return and transferred the center of their lives to the village. Only two weeks ago we went there for the first time, when they declared the festive opening of Iqrit’s football stadium. Today (August 28, 2013) we went there again – as they were attacked by inspectors from the Israel Land Administration and the police, and called for solidarity visits.

Iqrit is an hour’s drive from Haifa, just near the Lebanese border. You turn from the mountain road to a bumpy unmarked concrete path – one of the achievements of the Zionist attackers today was to remove any sign that may help visitors find their way to the village. At the top of the mountain you see the church building – the only building that was spared from the bulldozers. Around it, in makeshift tents, we found Iqrit’s youth and some visitors discussing the events of the day.

They had prior notice that the inspectors plan to attack on Sunday, so they called for alert and mobilization. Many people didn’t go to work and stayed on the ground. When the inspectors came and so some 30 people gathering in the village f\grounds they simple went away. Today’ morning they came again, found there only three young man and one women and carried their plot.

It was not the first visit of inspectors and the police, neither the great doomsday evacuation. It was just another unleashing of Zionist outrage at the youth that reclaim their right to live on their ancestors’ land.

At first the youth there offered coffee to the inspectors and tried to argue with them in a civilized way, to explain them that it is their land and that they have all the rights to be there. But the inspectors were determined to cause harm. In a mountain full of weeds they looked for tea herbs that were planted by the young villagers and uprooted them.

The four helpless youth got really angry when one of the inspectors “uprooted” also a big iron cross that was placed in the grounds and threw it away. Insulting religious symbols still make a special emotional resonance, for the attackers as well as for the locals. You can see some of it in a video that the youth succeeded to film and post in Facebook.

Another special target was a bed that one of the youth put in the open air just where the house of his grandfather stood – in order to sleep “in” his family’s home. The bed was carried away and deliberately broken. When we were discussing the event, people suggested that the bed reminded the inspectors of the Palestinian’s tendency to reproduce, and was targeted for this reason.

We were sitting together, enjoying the fresh air, the youth and some less young residents of Iqrit and political activists that came in solidarity, drinking coffee on the top of the mountain and looking at the Mediterranean beach, where you can see Mount Carmel and Haifa at the southern end. Everybody was discussing the experience of the last year and the perspective for continuing the struggle. (The picture above is from the wall of Bir’am’s church.)

“Why didn’t you call on us to come before?” We asked the youth that initiated the return. “When you make a protest tent you can’t rely only on the people of Iqrit.”

Their answer was that this is not a protest. It is their return to their village. They are rebuilding their lives in this old new place. They described a long process that they had to undergo personally and as a community. They didn’t want to make their personal return a window dressing for public relations.

But they are keenly aware that this is part of a bigger political struggle. They may be attacked again and again, and in a much more brutal ways. They know that their parents paid a much higher price in their struggle for return. They know that they need all the help that they can get, from every corner of the world. But for them the return to their homes and lands is not the end of the struggle, it is a new beginning.

From Iqrit we went on to Bir’am, some 20 kilometers to the east, where residents have declared their return two weeks ago (on August 17, 2013). In Bir’am we found, along the youth, some old people that lived there and experienced the forced expulsion, and now sleep in tents on the remains of their demolished houses. The returning people of Bir’am have already received official notification that the area is “closed” and that they should evacuate.

For three days, August 22-24, “Youth for the Prisoners” organized a volunteer work camp in the destroyed village of Ghabsiya, north of Kfar Yasif. The title for the day was “I will not remain a refugee”. Hundreds of youth from all around the area took part, as well as some old villagers from Ghabsiya.

In another grassroots initiative and a first of its kind, refugees from Mi’ar, just west of Sakhnin, plan to distribute tomorrow special leaflets to residents of Ya’ad, a Jewish-only settlement that is built on their lands.  They just want them to be aware that they are personally responsible for their continuing dispossession, not only the government.

My old Arab friends used to quote Ben Gurion, Israel’s first prime minister, saying about the Palestinian refugees: “The old will die and the young will forget”. Israel’s 65 years of aggression and racism didn’t let anyone forget. Now the young generation is leading the way to implementing the right of return.

Posted by freehaifa | Filed under Right of Return