The media is full of news about the trade war that Trump is threatening to unleash against China. President Xi, on his side, is calling for calm and for everybody to play by the rules, but Chinese officials are threatening severe repercussion for everybody in case of a widening conflict.

What is it all about? Is it just that the US is upset about its uneven trade balance with China? Well, nobody forced it to buy Chinese goods… and loan money from China to finance its living beyond its means. 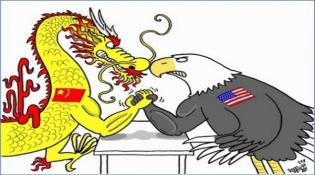 Recent reports by the US administration show that much more is at stake than just the trade balance. They complain about China’s industrial policy, its drive for innovation and development of local tech industry. Special wrath is reserved to China’s flagship international economic policy, titled “The Belt and Road Initiative” (BRI).

In fact, the USA administration and big companies understand, correctly, that by current trends they are losing fast on all fronts: technological leadership, economic power, world hegemony.

Just for being fully transparent, I must admit that I’m not at all neutral in this battle of the US to save its hegemony. For me all the talk in western media about the US representing “freedom” or “liberal values” sounds as sheer hypocrisy. I would welcome any chance that this hegemony will be dented, not least because under USA hegemony the Palestinian people are doomed to stay destitute and enslaved forever. And I’m not blind to the old and new crimes of colonialism, imperialism and neo-liberalism all over the world.

Anyway – I hate war, but I find a lot of fun in the ideological war.

The last twist in the script is that the US and other western powers complain that they are losing in the economic competition against China because of the intervention of the Chinese state.

Well, until yesterday they told us that it is an absolutely objective fact of the science of economics that free capitalist competition is superior to state-managed economy. They would tell us dummies that state planning is not working, so we should give up any dreams of Socialism, and let private capital manage the economy for profit. They would swear that their ugly unjust profit is the only way that Humanity can have economic progress and hope that some material gains will reach all of us humble working people.

But, no, they all run to populist Trump and cry for government intervention in order to save them from the economic success of the government-led Chinese economy.

How awful the Chinese government can be?

So, what is the Chinese government doing that is so unfair?

In the 2008 economic crisis, while US banks were busted by greedy bosses, the US government poured millions of taxpayers’ money to save the banks, and the western economies felt into long stagnation. Millions of Chinese workers lost their jobs in export industries. So the Chinese government gave special grants to hundreds of millions of poor peasants to buy electric appliances – to keep the factories working.

Last year the Chinese government’s intervention prevented a world cyclical economic crisis by reducing capacity in the coal and steel industries in a managed way instead.

On April 17th, 2018, the economist brought just another economic report from China that explains how its government intervention enabled it to overcome some obstacles and keep steady growth. Between the details I found one that seemed to me the best striking example why China’s economic model is so “unfair” that developed capitalist economies just can’t compete with it.

Remember the shocking reports about “ghost cities” in China that filled western media just a few years ago?

In a healthy capitalist economy, when supply outpaces demand, there is a “natural”, “healthy remedy”. It is called an economic crisis. Prices are falling, production is closed, until demand overcomes and prices and production rise again. In the meantime many workers lose their work, many productive forces are destroyed, and a lot of suffering takes place.

The economist’s reporter visited Wuhan, one of the so-called ghost cities, and found it full of life. He explains how the government of China intervened to solve the supply surplus in the housing market. The government bought millions of houses (all over the country) from constructors and gave them to poor people. Problem solved.

You can’t expect honest capitalist companies to compete with such unfair practices.