(This article was first published in Arabic on “Arab 48” on Saturday, April 21, 2018. Due to the importance of the subject, I also published it in Arabic and Hebrew.)

A consultative meeting was held today, Saturday, in the city of Shefa’amr, attended by dozens of academics and political and civil society activists. At the end of the meeting the participants announced the launching of the “One Democratic State in Palestine” campaign. 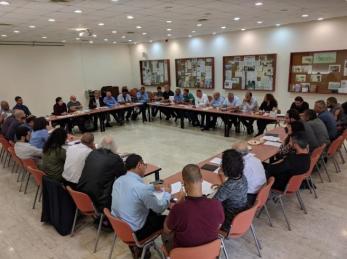 The closing statement of the meeting, which was forwarded to “Arab 48”, explained: “In view of the re-emergence of the one-state option as a more just solution to the Palestinian cause and the Jewish question in Palestine, and after all the partition and separation plans have reached a dead end, and in view of the human, material and moral disasters that these plans caused, a group of activists, academics, intellectuals, writers and  pioneers from the new generation, Palestinians and Israelis, gathered and announced their intention to embark on a broad campaign, promoting the establishment of One Democratic State (ODS) in historic Palestine.”

The participants defined the One State as a state where “the Palestinians, including the refugees, and the Israelis will live in a humanistic democratic regime based on equality, on the ruins of the colonial apartheid regime, putting an end to its continuing destructive consequences.”

The meeting discussed “a preliminary policy paper, composed of ten articles, prepared in advance by a small coordinating committee, which outlines the vision of the desired solution.” They also discussed “practical steps for the preparation of a conference next fall, for officially launching of the campaign in all the different regions where the Palestinian people are concentrated, as well as within the Israeli society.”

The participants agreed, according to the statement, to adopt the general outline of the document, while continuing to discuss the controversial issues. This approach is due to the way the initiative / campaign regards itself as part of a broader movement, active in the country and abroad for many years, in which groups, activists and academics, Palestinians and Israeli anti-Zionists, are all partners. The new initiative seeks to establish contact with all those activists in order to create a broad influential popular movement through popular mobilization and organizational, media and educational work around the ODS solution.

The participants called for “the transfer of the sublime idea of one state from the academic sphere and the discussion in limited circles to the public sphere and the popular strata.” This is in view of the ongoing changes in the structure of the conflict, with the starting point being the principles of justice, liberation and freedom, which are contrary to racist separation, colonialism and aggressive wars.

The participants emphasized their opposition to the use of the one-state solution as a threatening scarecrow to frighten the Israelis. They called for genuine support for this program as an expression of “a noble idea that guarantees justice and freedom from colonialism and creates a genuine basis for living together.”

In their discussions, the initiators clarified that this strategic vision requires a great effort and an organized continuing struggle at the public, ideological and political levels.

The message notes the importance that the initiators attribute to “the role of young activists in shaping the initiative, in formulating the vision and in leading the activity to realize it, because they are the age group most in need of a humanistic liberation vision and a path that will lead them from the reality of the bloody conflict to a better future and a free and secure life.”

4 thoughts on “A New Initiative for One Democratic State in Palestine – Meeting in Shefa’amer, April 21, 2018”